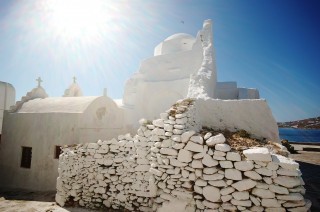 Mykonos people devoutly preserve their folkways. Let´s begin with New Year´s Day. Groups of children, even adults, sing the Christmas carols from door to door at New Year´s Eve. Except from sweets, all people cook roast, onion pie and local tyrovolia or honey pie with tyrovolia, honey and cinnamon in their houses. Lard is made in all the houses with greens or cabbage which symbolizes abundance.

Epiphany Day is a big celebration. It is then when the balosia, which signal the Carnival period, start. This is a Venetian custom and derives from the word ballonzolo which means dancing or ballocio=dance. These types of dancing are accompanied by traditional dance such as syrtos, balos, balaristos and kalamatianos.

At nights during the Carnival period people dress up as "koukougeroi", in other words they masquerade and have fun. Thus, we come to Ash Monday with lagana, lenten food and the feasts.

During the Lent period there is a custom, according to which the old and historic icon of Panagia Tourliani is removed from the Monastery of Ano Mera in Chora. The icon is removed the first Saturday after Ash Monday. All the people of Mykonos follow an approximately two-hour route on foot. The icon is placed again on its position on Lazarus Saturday and is escorted once again by the people.

The bakeries make lazarakia, a dough model of a man with his hands crossed and his eyes from gillyflowers, sugar, raisins and a garland on the head.

During Palm Sunday all island´s residents along with the priests of all the parishes are gathered in the Church of Aghia Eleni in Kastro (old Cathedral of Chora). From there the procession of the icon begins with the children holding knitted palms made by the priests and the parish of every church with palm branches. They make Labrokouloures (a type of local bun) with exquisite shapes during the Passion Week in their houses and in the bakeries and they adorn them with red eggs. They distribute them and they put them on the table on Holy Saturday.

On Holy Thursday and on Holy Friday the people in the bakeries give the shape of the cross to the bread and they slice it with their hand in a symbolic way without using knife due to the day. Women chant the bewail song of Virgin Mary on Holy Friday in all the churches of Chora and Ano Mera. This has been established by the Folk and Cultural Association of Mykonian Women during the last years.

All the traditional foods are on the table on Holy Saturday and on Easter Sunday. Stew in the night of the Resurrection, roast on Easter Day, sour cheese and louza, local products, onion pie, meat balls, little fried livers and red eggs. The locals keep few Labrokouloures which will be eaten wet from the first of May to Pentecost.

The people of Mykonos show their ritual belief by making Fanouropita many times during a year. They use seven lenten ingredients that refer to the Seven mysteries of the Church. The ingredients are flour, sugar, cinnamon, oil, raisins, sesame and water. When autumn makes its appearance along with the strong north winds then it is time for the slaughtering of the pigs. People invite other people to their houses where the pig slaughtering occurs.

Feasts take place there with amazing traditional cooking. Along with the feast they make louzes, sausages, syglina, glyna and salt the lard of the pig and thus providing food during the whole year.

At Christmas all houses smell wonderfully from traditional Christmas sweets like Diples, Foinikia, Kourabiedes and Christopsoma. In the villages they make one extra Christopsomo which they give to the animals of the house.

Feasts take place during the whole year. There one can meet a part of the truth of the place and its people. There you can also see the hospitality that is spread all over the place. Friends, relatives and visitors of the island they all pass by and no one leaves without a treat. The fairs custom is maintained over the years and despite tourism the residents show their respect and their deep love to their cultural heritage and the traditions, preserving it till today. There are big fairs where many people are gathered and smaller ones.

The fairs are organized by one, two or more families. These families are the owners or take care of the Church that celebrates. The foods that are offered there are exceptional especially the stew and its liquor, the braised, the meatballs, the onion pies, plenty of wine which is often local and many more. The fairs of the summer begin with Aghia Triada´s celebration day.

The most significant are those of Agia Marina in Ano Mera in Vorna region on July 17th, Prophet Elias in Skalados on July 20th, Aghia Anna at the beach on July 25th, Aghia Paraskevi on July 26th, Aghios Panteleimonas in Marathi and Vorna on July 27th, Sotiros celebration on August 6th, on August 17th in Glastros, the nine days after the Assumption of Virgin Mary in Ano Mera on August 23rd, the ablation of the head of Aghios Ioannis Prodromos on August 29th, the Cross celebration in Marathi on September 14th, Aghia Sophia in Vorna on September 17th. In October there is the celebration of Aghios Gerasimos and Artemios in Chora and in November the celebration of Aghia Aikaterini, Aghios Antonios in Pigados and Aghios Athanasios in the foothill of Kounoupas on January 17th.

Member of the Folk and Cultural Association of Mykonian Women