The textile of Mykonos 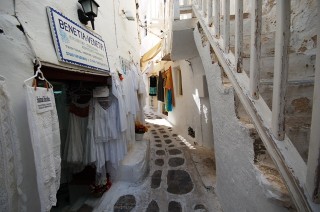 The textile of Mykonos

Many archaeological findings from Mykonos and the nearby islands such as Delos and Rhenia, show that from the very ancient times the weaving was significant developed in the region. It was almost the primary occupation of the women in Mykonos until the first decades of the 20th century. The majority of the travelers of the 17th, 18th and 19th centuries mention the textiles of the island. The textile of Mykonos was serving both the needs of the house and the clothing of the family. The clothes of the poorer families, which were the majority of the population, continued to be of textiles.

The professional weaving was developed during the Interwar period and the textiles of the island were competitive in international level. Textiles from Mykonos had been awarded in Paris exhibition as newspapers of that times report. In the thirties, the weaving was fashion according to information that we have collected. Textiles had a "second flourish" after 1950 until the decade of 1970 with the development of tourism.

Theodoros Charakopoulos played a significant role in making the textile of Mykonos successful and he established it as a "local" product. From a house use material and clothing of the low classes the textile became fashion with the promotion of this smart trade. It was used by haut couture houses, went beyond the borders of Greece and traveled along with the "good" reputation of Mykonos. More designers and traders who loved art helped later on in its development.

The advertisements in magazines and newspapers of that time also helped in its promotion. In this way the textile of Mykonos began to be in great demand that resulted in the increase of the production. More than 500 looms were in operation in Chora alone. In the fifties, the local production with the sheep breeding was providing a great percentage of the raw material, which was the wool, and the tireless girls and women workers of Mykonos were producing the final product, the textile. Each textile was almost unique.

We have to admit that it played a great role in the economic development of the island. In the beginning many men and women from Mykonos were going to the small island of Delos and were stretching over rugs their colorful textiles. The handmade textiles were promoted and were sold in this way by them without intermediates to the tourists that were coming with cruise ships. Afterwards they were stretching the textiles in Gialos of Chora in bagades (benches).

Little by little they started to transform their storehouses and the halls of their ground floors into shops during the summer months with Mykonos textile to be their primary product. In these two "gold decades" textile was at its peak and dressed urban houses as well as it decorated shops and hotels. It dressed even the palace of the royal family in Tatoi with its vivid and warm colors. It was also inspiration for artists. The characteristics of its weaving is the old boldoura of Mykonos and the parallel interchanging lines of the different colors and width with vivid colors that are tied together with harmony (listat, fingered, Byzantine, rural, lourad).

The Folklore Museum has a big collection of designs and artifacts of weaving that is being constantly enriched. Vassilis Kyriazopoulos, founder of the Folklore Museum had the prudence to collect and record over 500 designs from various textiles, in around 1970 when the textile was at its full peak. After the 1980 the textile of Mykonos was no longer in demand and therefore the looms from the houses were put aside, thrown or became firewood while other looms warp in storehouses with the hope that they will be back in operation.

There are still few women who weaver professionally and you can count them in the fingers of one hand. They weaver few types such as rags, rugs but mainly scarves for men and women. Women who still wear these scarves make the difference. Today is a special, expensive and luxurious type of handicraft compared to the imported products of the market. Keeping in mind that is worth paying attention to our textile which is a significant part of the modern history of the island, we decided in cooperation with the archaeologist Panayotis Hatzidakis all these that we collected in four years time (2002-2006) such as testimonies of the women weavers, marriage contracts, photos and folk material, recent articles in newspapers and magazines, to publish them all in a book that is going to be published soon.

Dimitra Nazou, Former Commissary and head of the educational programs of