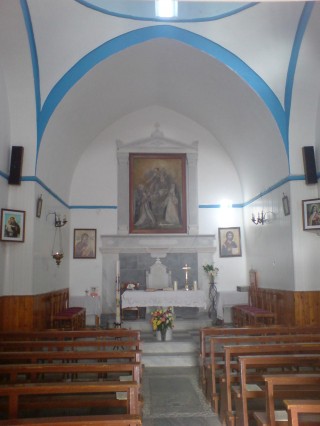 Mykonos lies 95 nautical miles from the port of Piraeus. It has only about 10000 inhabitants. During the warm months thousands of tourists spend their holidays on the island.

For the spiritual benefit of the thousands of Catholic tourists and the few Catholic inhabitants of the island, there is in Mykonos only one Catholic Church which is situated in Alefcandra Square near the picturesque windmills of Mykonos. It is worth mentioning that in the visitors book of the church, for 1997, 12156 visitors wrote their names.

The Catholic Church of Mykonos has been dedicated   to the Virgin of St. Rosary since 1668 . In 1677 the archiepiscopal delegate Leonardo Xanthakis as witnessed restored the church by the inscription in Latin, which is situated above the central entrance.

The icon above the Holy Table depicts the Virgin and the Child between St. Dominic, the apostle of piety of St. Rosary, and St. Catherine of Sienna. It was transported to Mykonos from Venice in 1715. Taking this opportunity Vicar John Vitalis paved the floor of the church with marble tiles and placed the gilt arch round about the icon , thanks to the generous offering on the part of his niece Maroussas Vitali . An inscription in the centre of the church commemorates this.

The Canon Fr. Foskolos , AN inhabitant of Tinos , decorated the Holy Table with paintings in 1748. You used to be able to read an inscription about this on the upper side of the Monstrance. It was possible also to discern another inscription of the priest on the two fretworks capitals of the arch , a little bit above the icon .

Of all this there is now no more , because the Sanctuary Walk was burnt completely on the night of May Day 1991 - on Labor Day .

The central entrance is on the West, towards he sea, facing the islands of Delos Rinia and Syros . The next door, near the Sanctuary, which is still there faces north and was the entrance to the Sacristy and the residence of the priest. This residence consisted of a main room and three bedrooms.

The Church has lost all this property and the courtyard of the church, which is located in frond of the central entrance. The icon of the Virgin of Rosary suffered great damage during the fire of May Day 1991. After restoration which it underwent in Tinos by the icon restored Anna Prelorentzou from Komi , Tinos , the icon was transported with pomp and ceremony by his Reverence Fr. Nicholas Printesi , Archbishop of Naxos - Tinos - Mykonos etc. at which many worshippers, especially from Tinos, were present . On 8th October 1997 His Reverence consecrated the new marble Holy Table which came from the offerings of the faithful.

The parish priest of Mykonos is since 1994, general archiepiscopal delegate of the Archbishopric of Naxos - Tinos and Priest of the Parish church of St. Nicholas, Tinos Fr. Rokkos Psaltis .

During the winter months, and especially during the periods of Christmas, Epiphany and Lent, liturgies take place periodically for the permanent Catholic residents of Mykonos. For Easter there is one special program in line with the celebration of the Western Calendar, for the benefit of foreign tourists. 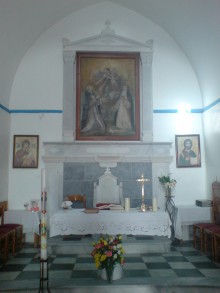 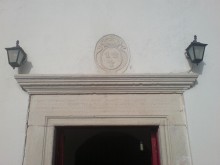 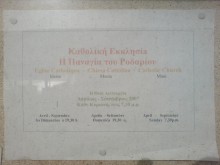 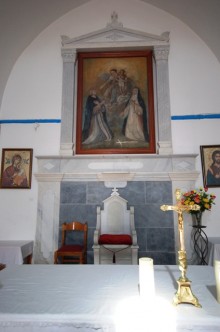 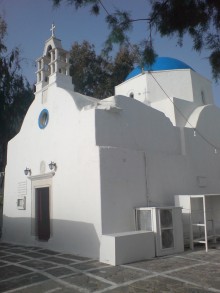