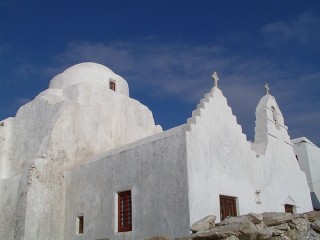 This is the most popular and most photographed of the 400 churches on the whole island of Mykonos. What makes this church so unique is its construction which is an assymetrical conglomeration of 4 churches into one. Notice the 4 different architectural styles mixing Byzantine, vernacular, traditional and western style.

The church dates back to the middle of the 15th century A.D. The name comes from the word "Porta" = Door, as it was build right next to the entrance of the Medieval castle in Mykonos town , which unfortunately has been completely destroyed.

Building of great Architectural value, it consists of 4 ground floor temples and one of the first floor, which is the main church. The churches around it (Aghios Sozontas, Aghii Anargyri, Aghia Anastasia, and Aghios Efstathios) comprise the whole of the church of Paraportiani

Paraportiani - One of the most famous architectural structures in Greece is the church,  Paraportiani. Positioned near the main harbor entrance, this church is the central feature of the "Kastro" or castle area, the oldest section of town. It"s name means inner or secondary door which it was to the Medieval stone walls which encircled the area. First begun in 1475, Paraportiani in reality is a group of five smaller churches which were constructed over a period of time and not completed until well into the 17th century. The two story structure was molded together utilizing four of it"s churches to form a base for the fifth church which when placed on top formed a central domed roof.

Pictures and photos of paraportiani .