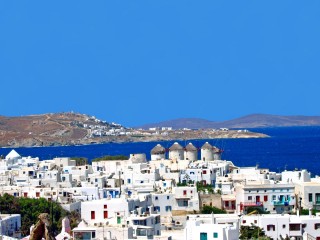 Mykonos Chora is definitely one of the nicest and most charming towns of the Greek islands, with endless small streets, shops, windmills, churches, terraces and whitewashed houses. A place to wonder around for days and every time find something unexpected. Because of the street layout (intended to confuse pirates) it"s also the perfect place to lose your way. It has two harbours where you can just sit and have a drink or something to eat, while enjoying the views and the people that walk by, and another harbour where the ferries depart. Some ferries however dock at Tourlos, which is a half an hour walk away from Mykonos town itself. Behind the harbour front you will find endless (and very clean!) shopping streets with souvenirs and jewellery (I guess mainly for the older American tourists that visit Mykonos town on a cruise), the hotels and guesthouses, and more restaurants. Most ticket offices for the ferries are on the main boulevard. Mykonos also has its own international Mykonos JMK Airport.

A LITTLE MORE ABOUT MYKONOS TOWN
Mykonos Chora is quite large for a Cycladic town. All the houses are painted white and have brightly coloured shutters in front of the windows, mostly blue, green and red. The village goes steeply up the hill with roads and also with stairs on some places. The narrow streets close to the harbour buzz with activity. They are filled with attractive small shops, Bougainville trees in purple bloom, small cafes and churches, and they usually end up at a square with a terraced restaurant and a church, or at the harbour front with its colourful fishing boats, the row of windmills and a pelican or two. Dressed up people mingle with the ones that don"t care so much  and if there is not too much wind (because the "meltemi" can blow from day to day) they all end up in the harbour where the majority of the big restaurants are. Some of the nice, good and cheaper restaurants can be found in the small streets behind the harbour front though.

The island was quiet and peaceful until it was discovered by shipping magnate Aristotle Onassis, who brought Jackie Kennedy to the island. Since then, owning a house on the island has been considered a status symbol by wealthy Athenians. In recent years a prominent gay scene has established itself here. Mykonos is also the place that Shirley Valentine came to and "found herself". It is also home for Petros the pelican. He was one of a flock which flew to Mykonos from the mainland in the 1950"s.
In Mykonos Town there is an archaeological museum which exhibits vases, ranging from the prehistoric to the late Hellenistic period (25th-1st century B.C.), grave statues, steal and funerary urns from the nearby island of Rheneia, and very few finds from Mykonos. It is also the place where you can make a daytrip to the archaeological site of the island Delos.
Mykonos Town has three bus stations, the largest one at Fabrica Square, where you find the busses for Platys Gialos, Psarou, Ornos, Agios Ioannis, Paranga and the Paradise - and Super paradise beaches. Close to this bus station you will also find the post office. More towards the ferry harbour is the bus stop for Kalafatis and Elia, and on the water front is the bus stop for Tourlos and Agios Stefanos The ferry harbour of Mykonos Chora is a busy place. The ferries dock and the whole area comes to live. There are always a lot of people waiting to get on board. You can be amazed to see how many people can disembark and be replaced by new people once a ferry has sailed in. Mykonos has good connections to other islands and to the harbours Rafina and Piraeus.

Unlike most island ports, the main town is built not on a hillside but spread out over a flat plain. The harbour area is split between the fishing quay, with its small boats beached on the sand, and the main port where the ferries pull in and tarmac and concrete make up the view. Most traffic is banned from the waterfront and new building is confined to the outskirts so the only way to explore is on foot, getting lost in the maze of streets.
On a once-fortified spit of land stands Panagia Paraportiani, probably the most photographed church in Greece. It is, in fact a cluster of chapels fused into what was once described as "an organic masterpiece of accidental architecture" and there are also the trademark quartet of windmills on the hillside above.
Though an attractive enough resort, the town suffers from a shagged out atmosphere by day. Scruffy tables line the concrete quayside where languid waiters tend to the meagre scattering of customers. It is different at night. Then the boys come out to play - girls too, but mostly boys. Pansies to perfection they cruise the strip and take in a few bars before heading off to any one of a gaggle of gay clubs. For meals, most gravitate to Little Venice, a clutch of converted houses perched over the sea. The restaurants may ooze charm but they also put the squeeze on wallets. The picturesque tables come with a hefty price tag.
Mykonos still attracts a better-heeled clientele as the cheaper end of the tourist market shies away from the rip-off prices. A meal will cost double the average and you will search in vain for a cheap and cheerful bog-standard tavern. We are more likely to dine Mexican, Thai or vegetarian than gyros and chips.
There is a folklore museum packed with island paraphernalia and further inland - perversely - the maritime museum with some beautiful models of ships. The House of Helena is decked out with original 19th century furniture but the archaeological museum is a disappointment given the proximity of Delos.

As goes for everything, accommodation in Mykonos Town has its advantages and disadvantages. Some good points are that you are always close to the unending nightlife, all the supermarkets and shops are at your feet, and if you are staying near Fabrica square (where the main bus station is situated), you can very easily reach almost every beach on the island by using the cheap and efficient public bus system. Moreover, if you like drinking alcohol when you are going out at night, it is much easier to get back home when home lies within 5-15 minutes of walking (when we say `in` Mykonos Town, we mean a distance of up to 800 meters from the actual town centre), instead of driving your moped back through badly lit streets, or getting a taxi in the early-morning hours when everybody needs one.
On the other hand, staying in town means that you might have to spend more on accommodation, and that you will have to tolerate the noise of the town, which in some parts of Mykonos (especially if you are staying next door to a bar or a nightclub, or on a main shopping street) can be a very good reason to have sleepless nights. That is, of course, if you are planning to have any sleep while on the island!
Please note that Mykonos town is flat, therefore, it does not usually offer any special views of the sea, the sunset, etc. If you are up for something like that, then you will need to take a hotel or unit that is slightly towards the outskirts of town, on the slope that overlooks Mykonos Town, the most important and popular areas being Despotika, School of Fine Arts and Vryssi. Most units built there are much quieter and generally offer much better views than the ones that are really downtown.  The border between the town core and the town outskirts is Fabrica Square (on many maps featured also as `Southern Bus Station`) - this is the spot where the public buses, destined for the nice beaches further away from town, depart from. 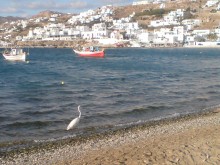 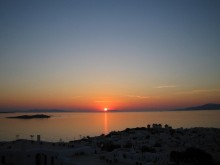 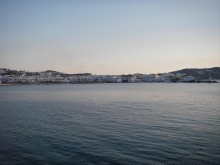 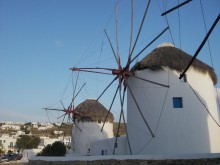 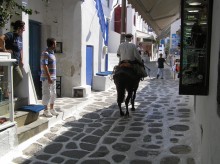 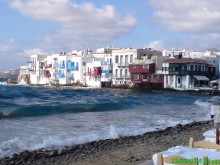 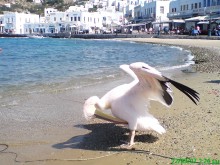