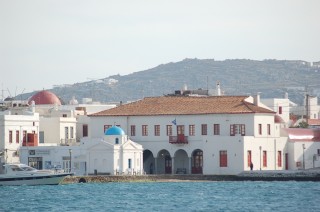 Informations about The TOWN HALL of MYKONOS Island Greece

The TOWN HALL is a elegant,  two-storied building 1780 with a roof o breaks  that was manufactured at the period of Orlofika in order to it constitutes the Seat of the Russian General Consul of Archipelago. Later it came under the authority of the jurisdiction of Community  (Local body of self-government of island that it functioned before the Revolution), in order to accommodates up to today the offices of Municipality of Mykonos. Next  to it , the frugal and imposing building of MAVROU "Black" existed the first public school of Mykonos, that was builded  by Othona (1859) in drawings of Bavarian  mechanic Bailer, with distinctly romantic still .The building  was linked with the small temple of Saint Nikolaos of Kadenas that was found on islet with a  bridge. The temple of Saint Nikolaos of Kadenas was found in this place at least from 1700, while the islet protector of harbour from the winds exists in the all naval maps from the 15th century. At  gialos-paralia- beach is found Kazarma with kamares  were accommodated the soldiers of Mantos Mayrogenous while the above floor constituted her residence. Here also exists also the old school of Mavrou-"Black" that was built in 1857 drawn from the Bavarian  mechanic Weiler with expense of the Egyptian of Mark of Mavrou. These two buildings are very important