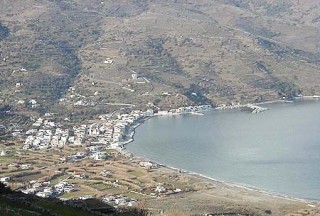 The island in ancient times contained an Ionian population, perhaps with an admixture of Thracian blood. Though originally dependent on Eretria, by the 7th century BC it had become sufficiently prosperous to send out several colonies, to Chalcidice (Acanthus, Stageira, Argilus, Sane). The ruins of Palaeopolis, the ancient capital, are on the west coast; the town possessed a famous temple, dedicated to Dionysus.In 480 BC it supplied ships to Xerxes and was subsequently harried by the Greek fleet. Though enrolled in the Delian League it remained disaffected towards Athens, and in 477 had to be coerced by the establishment of a cleruchy on the island; nevertheless, in 411 Andros proclaimed its freedom, and in 408 withstood an Athenian attack. As a member of the second Delian League it was again controlled by a garrison and an archon. In the Hellenistic period Andros was contended for as a frontier-post by the two naval powers of the Aegean Sea, Macedon and Egypt. In 333 it received a Macedonian garrison from Antipater; in 308 it was freed by Ptolemy I of Egypt. In the Chremonidean War (266-263) it passed again to Macedon after a battle fought off its shores. In 200 it was captured by a combined Roman, Pergamene and Rhodian fleet, and remained a possession of Pergamum until the dissolution of that kingdom in 133 BC. Before falling under Turkish rule, Andros was from A.D. 1207 till 1566 governed by the families Zeno and Sommariva under Venetian protection. After a few centuries, Cyclades joined the rest of Greece in 1821.

On May 10th, 1821, Theophilos Kairis, one of the leading intellectuals of the Greek Revolution, declared the War of Independence by raising the Greek flag at the picturesque cliffside church of St George: at this time, a famous heartfelt speech, or "rhetoras", inspired shipowners and merchants to contribute funds to build a Greek Navy to combat the Ottomans.

Andros (Chora or Hora), the capital of the island, is on a headland between two beaches. It has a mix of post-World War I neoclassical mansions with vernacular Cycladic houses. The town squares are paved with marble. At the end of the headland are two islands, the first linked to the mainland by a brick bridge a ruined Venetian castle and the second a lighthouse. There are four museums: the extensive Archaeological Museum, an exceptional Museum of Modern Art, a Nautical Museum and a Folklore Museum.

The main resort town is Batsi on the western coast which is popular with Greek tourists.

The island is famous for its mineral springs at Apoikia where the water comes out of a lionhead.

Stenies, on the island"s eastern coast near the beaches of Yialia and Piso Yialia, is probably the island"s most picturesque village. However, the east coast of the island does not have an advanced tourism infastucture, and historically, no decisive steps have been made to increase the flow of visitors, under the fear of losing the traditional landscape as in the case of neighbouring islands (notably Mykonos). There are no commercial distractions in Stenies.