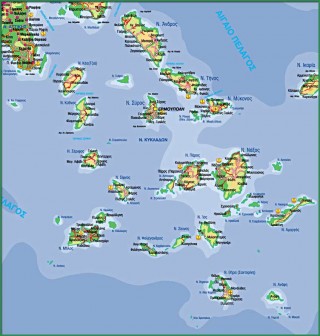 All Cyclades Islands GREECE BOOK YOUR ROOM OR HOTEL AT CYCLADES HERE !!

The Cyclades are a Greek island group in the Aegean Sea, south-east of the mainland of Greece and an administrative prefecture of Greece. They are one of the island groups which constitute the Aegean archipelago. The name refers to the islands around the sacred island of Delos.

Most of the smaller islands are uninhabited.

Ermoupolis, on SYROS, is the chief town and administrative center of the prefecture.

The islands are peaks of a submerged mountainous terrain, with the exception of two volcanic islands, Milos and Santorini (Thera). The climate is generally dry and mild, but with the exception of Naxos the soil is not very fertile agricultural produce includes wine, fruit, wheat, olive oil, and tobacco. Cooler temperatures are in higher elevations and mainly do not receive wintry weather. In transportation, the Cyclades is the only prefecture in Greece that is not linked with a state-maintained highway or a highway number. All of the roads in the island complex are secondary or provincial.

The history of Cyclades Islands

The significant Late Neolithic and Early Bronze Age Cycladic culture is best known for its schematic flat female idols carved out of the islands" pure white marble centuries before the great Middle Bronze Age ("Minoan") culture arose in Crete, to the south: these figures have been looted from burials to satisfy a thriving Cycladic antiquities market since the early 20th century.

A distinctive Neolithic culture amalgamating Anatolian and mainland Greek elements arose in the western Aegean before 4000 BCE, based on emmer wheat and wild-type barley, sheep and goats, pigs, and tuna that were apparently speared from small boats (Rutter). Excavated sites include Saliagos and Kephala (on Keos) with signs of copper-working, Each of the small Cycladic islands could support no more than a few thousand people, though Late Cycladic boat models show that fifty oarsmen could be assembled from the scattered communities (Rutter), and when the highly organized palace-culture of Crete arose, the islands faded into insignificance, with the exception of Delos, which retained its archaic reputation as a sanctuary through the period of Classical Greek civilization.

The first archaeological excavations of the 1880s were followed by systematic work by the British School at Athens and by Christos Tsountas, who investigated burial sites on several islands in 1898 - 1899 and coined the term "Cycladic civilization". Interest lagged, then picked up in the mid-20th century, as collectors competed for the modern-looking figures that seemed so similar to sculpture by Jean Arp or Constantin Brancusi. Sites were looted and a brisk trade in forgeries arose. The context for many of these Cycladic figurines has been mostly destroyed and their meaning may never be completely understood. Another intriguing and mysterious object is that of the Cycladic frying pans. More accurate archaeology has revealed the broad outlines of a farming and seafaring culture that had immigrated from Asia Minor ca 5000 BCE. Early Cycladic culture evolved in three phases, between ca 3300 - 2000 BCE, when it was increasingly swamped in the rising influence of Minoan Crete. The culture of mainland Greece contemporary with Cycladic culture is termed Helladic.

In recent decades the Cyclades islands have become extremely popular with European and other tourists, and as a result there have been problems with erosion, pollution, and water shortages.

CYCLADES ISLANDS How to get THERE.

Ferry routes tend to separate the Cyclades into western, northern, central and eastern subgroups. Most ferries serving the Cyclades connect one of these subgroups with Piraeus, Lavrio or Rafina on the mainland. The central Cyclades (Paros, Naxos, Ios and Santorini) are the most visited and have the best links with the mainland, usually Piraeus. The northern Cyclades (Andros, Tinos, Syros and Mykonos) also have good connections. The western Cyclades (Kea, Kythnos, Milos, Serifos, Sifnos, Folegandros and Sikinos) have less frequent connections with the mainland, and the less-visited eastern Cyclades (Anafi, Amorgos, Iraklia, Shinousa, Koufonisia and Donousa) have the fewest links. Ferries from Piraeus to Cyprus, Egypt and Israel stop at Santorini and Mykonos.

In summer, there are daily hydrofoils from Piraeus to Kythnos, Serifos, Sifnos, Milos and Kea, there are daily hydrofoils from Iraklio (Crete) to Santorini. Although hydrofoils can travel faster than ferries, they often take longer to get to their destination because of the many stops they make and their sensitivity to weather. Large high-speed catamarans are very popular. Cats travel daily between Piraeus, Syros, Mykonos, Paros and Naxos, daily from Rafina to Tinos and Mykonos, weekly to Syros, Paros, Naxos and Amorgos, daily between Rafina, Tinos and Mykonos, continuing to Andros twice weekly and to Paros, Naxos and Amorgos once a week. There are six weekly high speed ferries from Piraeus to Mykonos Ios and Santorini.

Olympic Airlines flights between Mykonos, Santorini, Naxos, Syros, Paros and Milos provide the islands only inter-island air link. There are usually relatively good ferry connections within each of the western, northern, central and eastern subgroups, but infrequent connections between the different subgroups via Paros, the ferry hub of the island group.

In summer, there are daily hydrofoils between Kythnos, Serifos, Sifnos and Milos, as well as frequent connections between Mykonos, Naxos, Paros and Syros. There are daily cats between Syros, Mykonos, Tinos, Paros, Naxos, Ios and Santorini.

From  Mykonos, you can travel to other nearby islands, such as Tinos, Paros, Andros, Ios, and Naxos, and you can also travel to Santorini and Crete and connect to Samos, Sifnos, Serifos, Folegandros, Skiros, Skiathos, and Thessaloniki. Three times a week, boats leave Mykonos for Rhodes, Kos, Amorgos, and Koufonissia. All travel by sea depends upon weather conditions and the Meltimi, the wind

GET ALL INFO FOR MYKONOS HOTELS AT

AND AT  http://www.allmykonoshotels.com/  OR make your booking now 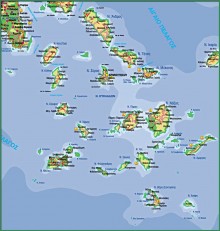