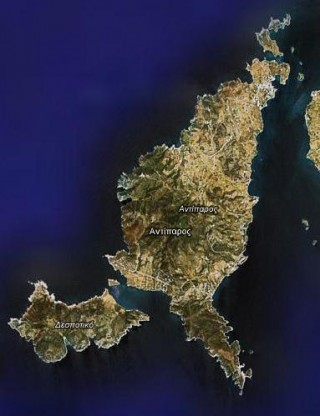 Antiparos is an island in the island group Cyclades in the Aegean Sea, in the modern eparchy of Naxos, separated by a strait (about 1-½ miles wide at the narrowest point) from the west coast of Paros: the boat trip is just ten minutes from Pounta, a little port on Paros which can be reached by bus or taxi, and about twenty minutes from the main port in Paros, Parikia. The island"s seashore is 57 kilometers long, but it"s not big in population: there are approximately 900 residents in Antiparos, most of whom live in Kastro, a village on the north coast, and are employed in agriculture and fishing. Formerly piracy was common.

The largest tourist attraction and only remarkable feature in the island of Antiparos is a stalactite cavern on the south coast, which is reached by a narrow passage broken by two steep and dangerous descents which are accomplished by the aid of rope-ladders. The grotto itself, which is about 150 feet by 100, and 50 feet high (not all can be seen from any part, and probably some portions are still unexplored), shows many remarkable examples of stalactite formations and incrustations of dazzling brilliance. It is not mentioned by ancient writers; there is, however, in the entrance of the cavern an inscription recording the names of visitors in ancient times. The first traveller of modern times whose visit is recorded was the marquis de Nointel (ambassador of Louis XIV to the Porte) who descended it with a numerous suite and held high mass there on Christmas day 1673. Accessible areas of the cavern walls are covered with graffiti, some of them beautifully lettered, recording visitors during the 18th and 19th centuries: these include royalty and other well-known tourists alongside geologists and engineers.

There are plenty of beaches on the island, but the biggest one is Psaraliki. There are two beaches called Psaraliki, the first and the second, but the first one is the biggest and that"s where all the tourists go swimming. Between the beaches lies "Fanari beach club" and beyond the second lies "Time Marine beach club" There are also other beaches and restaurants on the island, but they are harder to reach, although you can take the bus to them from the port. The square in Antiparos is the central meeting place, and this is where most of the night clubs and bars are situated.

BOOK A HOTEL ROOM AT MYKONOS