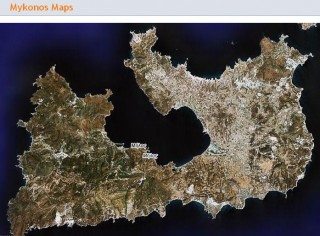 Milos (formerly Melos, and before the Athenian genocide at 416 B.C. Greek: Μήλος, not related to the Modern Greek word = "milo" for APPLE which has the same spelling except for the trailing sigma) is a volcanic ISLAND  in the AEGEAN SEA.

Milos, one of the thousands of Greek islands, is to be found in the SW Cyclades, a large island group in the Aegean Sea. It is 86 nautical miles from Piraeus and approximately half way between Piraeus and Crete. Its surface area is 151 square kilometres and its varied coastline is 125 kilometres long.

The geographical bearing of its capital, Plaka, is 36o 44" 35"" longitude, 24o 25" 28"" latitude.
In general terms, it is a low island, whose highest peak is Prophet Elias in the north-west, rising to 751 metres. The Small Mountain in the same area is 636 metres high, while no other peak
reaches over 400 metres.

Its most characteristic feature is its magnificent gulf, providing a natural harbour, which is possibly the largest in the Mediterranean. This, in combination, with the islands vast mineral wealth, has played and is still playing, a major role in the history, economy, culture and development of the island society throughout the last 7,000 years.

Most of the inhabitants live in the 8 villages, which are in the flat, northern part of the island. These are the capital Plaka, Plakes, Triovassalos, Pera Triovassalos, Tripiti, Pollonia, Zefiria, and Adamas.

Officially, Milos is part of the county of the Cyclades, whose capital is the town of Ermopolis, on the island of Syros. However, de-centralisation of the administration has been achieved
by sub-dividing the county into four provinces. One of these is Milos province, incorporating the Western Cycladic islands, Kimolos, Siphnos and Seriphos and with its administrative capital on Milos.

Its geological make-up, which will be dealt with later, is volcanic. However, this formation which is different from that of the rest of the Cyclades group, (with the exception of Kimolos), is the reason for the island"s lack of forests, rich vegetation, natural water supplies and rivers. Never the less, it has given it colour. This unique Milos colour, is dazzlingly evident in its multitude of beautiful beaches - more than 75- with their glistening silver sand and clear blue waters. Also in the chalky white, terracotta, ochre and jet black rocks, the like of which can be seen nowhere else in the whole of Greece.
Milos  Island Cyclades Greek Islands Greece