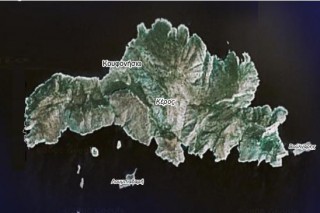 Keros is an uninhabited Greek island in the Cyclades about 10 kilometers southeast of Naxos. It has an area of 15 square kilometers and its highest point is 432 meters. It was an important site to the Cycladic civilization that flourished around 2500 BC.

Keros is especially noted for the flat-faced marble statues which later inspired the work of Pablo Picasso and Henry Moore.