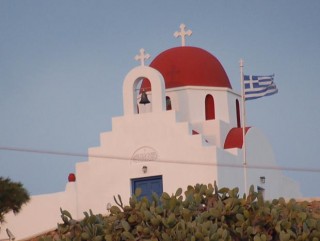 Paros is an island of Greece in the Aegean, one of the largest of the group of the Cyclades. It lies to the west of Naxos, from which it is separated by a channel about 8 km (5 mi) wide, and with which it is now grouped together, in popular language, under the common name of Paronaxia.

Paros geographic co-ordinates are 37° N. lat, and 25° 10" E. long. The area is 165 km² Its greatest length from N.E. to S.W. is 13 miles (20.8 km)., and its greatest breadth 10 miles (16 km). It is formed of a single mountain about 800 m (2500 ft) high, sloping evenly down on all sides to a maritime plain, which is broadest on the north-east and south-west sides. The island is composed of marble, though gneiss and mica-schist are to be found in a few places. The capital, Paroikia or Parikia (Italian, Parechia), situated on a bay on the north-west side of the island, occupies the site of the ancient capital Paros. Its harbour admits small vessels; the entrance is dangerous on account of rocks. Houses built in the Italian style with terraced roofs, shadowed by luxuriant vines, and surrounded by gardens of oranges and pomegranates, give to the town a picturesque and pleasing aspect. Here on a rock beside the sea are the remains of a medieval castle built almost entirely of ancient marble remains. Similar traces of antiquity in the shape of bas-reliefs, inscriptions, columns, & etc., are numerous in the town, and on a terrace to the south of it is a precinct of Asclepius. In the main square of the largest town of the island, Parikia, is the town"s main church of Ekatontapiliani. Its oldest structures almost certainly antedate the official Roman adoption of Christianity; it is in fact said to have been founded by the mother of the emperor Constantine, Saint Helen, during her pilgrimage to the Holy Land. There are two adjoining chapels, one of very early form, and also a baptistery with a cruciform font.

On the north side of the island is the bay of Naoussa (Naussa) or Agoussa, forming a safe and roomy harbour. In ancient times it was closed by a chain or boom. Another good harbour is that of Drios on the south-east side, where the Turkish fleet used to anchor on its annual voyage through the Aegean. The three villages of Tragoulas, Marmora and Kepidi (pronounced Tschipidi), situated on an open plain on the eastern side of the island, and rich in remains of antiquity, probably occupy the site of an ancient town. They are known together as the "villages of Kephalos," from the steep and lofty headland of Kephalos. On this headland stands an abandoned monastery of St Anthony, amidst the ruins of a medieval castle, which belonged to the Venetian family of the Venieri, and was gallantly though fruitlessly defended against the Turkish general Barbarossa in 1537.

Paros Island Cyclades Greek Islands Greece and the Parian marble, which is white and semi-transparent, with a coarse grain and a very beautiful texture, was the chief source of wealth to the island. The celebrated marble quarries lie on the northern side of the mountain anciently known as Marpessa (afterwards Capresso), a little below a former convent of St Mina. The marble, which was exported from the 6th century BC, and used by Praxiteles and other great Greek sculptors, was obtained by means of subterranean quarries driven horizontally or at a descending angle into the rock, and the marble thus quarried by lamplight got the name of Lychnites, Lychneus (from lvchnos, a lamp), or Lygdos (Plin. H. N. xxxvi. 5, 14; Plato, Eryxias, 400 D; Athen. v. 205 f; Diod. Sic. 2, 52). Several of these tunnels are still to be seen. At the entrance to one of them is a bas-relief dedicated to Pan and the Nymphs. Several attempts to work the marble have been made in modern times, but it has not been exported in any great quantities.

The story that Paros was colonized by one Paros of Parrhasia, who brought with him a colony of Arcadians to the island (Heraclides, De rubus publicis, 8; Steph. Byz.), is one of those etymologizing fictions in which Greek legend abounds. Ancient names of the island are said to have been Plateia (or Pactia), Demetrias, Zacynthus, Hyria, Hyleessa, Minoa and Cabarnis (Steph. Byz.). From Athens the island afterwards received a colony of Ionians (Schol. Dionys. Perieg. 525; cf. Herod. i. 171), under whom it attained a high degree of prosperity. It sent out colonies to Thasos (Thuc. iv. 104; Strabo 487) and Parium on the Hellespont. In the former colony, which was planted in the 15th or 18th Olympiad, the poet Archilochus, native of Paros, is said to have taken part. As late as 385 BC the Parians, in conjunction with Dionysius of Syracuse, founded a colony on the Illyrian island of Pharos (Diod. Sic. xv. 13). So high was the reputation of the Parians that they were chosen by the people of Miletus to arbitrate in a party dispute (Herodotus V. 28 seq.). Shortly before the Persian War Paros seems to have been a dependency of Naxos (Herodotus v. 31). In the Persian War Paros sided with the Persians and sent a trireme to Marathon to support them.

In retaliation, the capital Paros was besieged by an Athenian fleet under Miltiades, who demanded a fine of 100 talents. But the town offered a vigorous resistance, and the Athenians were obliged to sail away after a siege of twenty-six days, during which they had laid the island waste. It was at a temple of Demeter Thesmophoros in Paros that Miltiades received the wound of which he afterwards died (Herod. vi. 133�136). By means of an inscription Ross was enabled to identify the site of the temple; it lies, as Herodotus suggests, on a low hill beyond the boundaries of the town. Paros also sided with Xerxes against Greece, but after the battle of Artemisium the Parian contingent remained in Kythnos watching the progress of events (Herod. viii. 67). For this unpatriotic conduct the islanders were punished by Themistocles, who exacted a heavy fine (Herod. viii. 112). Under the Athenian naval confederacy, Paros paid the highest tribute of all the islands subject to Athens � 30 talents annually, according to the assessment of Olymp. 88, 4 (429 BC). Little is known of the constitution of Paros, but inscriptions seem to show that it was democratic, with a senate (Boule) at the head of affairs (Corpus inscript. 2376�2383; Ross, Inscr. med. ii. 147, 148). In 410 BC the Athenian general Theramenes found an oligarchy governing Paros; he deposed it and restored the democracy (Diod. Sic. xiii. 47). Paros was included in the new Athenian confederacy of 378 BC, but afterwards, along with Chios, it renounced its connection with Athens, probably about 357 BC. Thenceforward the island lost its political importance. From the inscription of Adule we learn that the Cyclades, and consequently Paros, were subject to the Ptolemies of Egypt. Afterwards they passed under the rule of Rome. When the Latins made themselves masters of Constantinople, Paros, like the rest, became subject to Venice. In 1537 it was conquered by the Turks. The island now belongs to Greece.

GET ALL INFO FOR MYKONOS HOTELS

OR BOOK ONLINE YOUR HOTEL AT PAROS ISLAND HERE