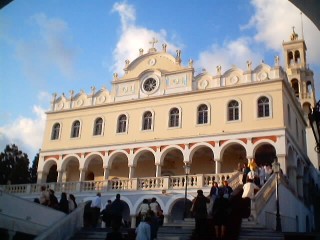 GET ALL THE INFO ABOUT TINOS ISLAND  NEXT TO MYKONOS ISLAND

Tinos Island Cyclades Greek Islands Greece . Tinos island  is a Greek island situated in the Aegean Sea. It is located in the Cyclades .
Between 1207 and 1715, Tinos was in Venetian hands.  From 1715 to 1821, Tinos was ruled by the Ottoman Empire before joining with Greece.

Tinos is famous amongst Greeks for: the Church of Panagia Evangelistria, its 20 or so windmills, about 1000 artistic dovecotes, 50 active villages and its Venetian fortifications at the mountain, Exobourgo. On Tinos, both Greek Orthodox and Roman Catholic (the latter being mostly descendants of Maltese emigrants) populations co-exist, and the island is also well known for its famous sculptors and painters, such as  Gyzis, Chalepas and Tsokles.

The island of Tinos is located near the geographical center of the Cyclades island complex, and because of the [[Panagia Evangelistria]] church, with its reputedly miraculous icon of Virgin Mary that it holds, Tinos is also the center of a yearly pilgrimage that takes place on the date of the Dormition of the Virgin Mary (15 August, "Dekapentavgoustos" in Greek). This is perhaps the most notable and still active yearly pilgrimage in the region of the eastern Mediterranean.  Many pilgrims make their way the 800 metres from the ferry wharf to the church on their hands and knees as sign of devotion.  The day also commemorates the 1940 sinking by the Italians of the Greek cruiser Elli which was participating in the festivities that year.

GET TO KNOW TINOS ISLAND BETTER GET A PLACE THERE !!

Tinos island has a unique and varied landscape.  From the shores of Panormos and Kolimbithra on the North Shore to Kionia, Agios Yannis O Portos, and Agios Sostis on the Southern Shore, Tinos has many beaches, just to name a few.  Tsiknias is the highest mountain on the island at 750 meters and hides the quaint village of Livada.  The mountain of Exobourgo is quite distinct, and unlike its more rounded Cycladic neighbors, has a more jagged appearance that is more home in the Alps.  Between Tsiknias and Exobourgo lies the fruitful plain of Falatados.  This area is unique on the island as its relatively flat (yet elevated terrain ~ 300 M) is rare on the island.  This made it a strong candidate for an as of yet inbuilt airport on the island.  The Meltemi winds and valid concerns of local villagers of the towns of Falatados, and Steni have all but halted the project.  The area around Volax is a surreal and very unusual landscape with giant boulders some the size of multistory buildings.  The village of Volax lies at the center of this amazing landscape.  To the west, the mountains surrounding Pyrgos are full of some of the most beautiful green marble in all of Greece.

The mining on the island includes marble,  asbestos and  mine near Volakas (also known as Volax).

Tinos experiences only Mediterranean climate and has warm and dry summers and mild and wet winters.  The Etesian winds that come from northwest India affect the island bringing

Tinos has three ports, one for passenger speed boats, and two for ferries and highspeed boats which carry passengers and cars to other ports, including Mykonos 35 min, Piraeus, Rafina, Andros and Syros.