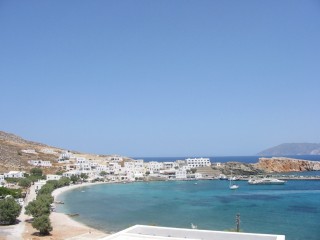 Folegandros, or Pholegandros, is a small Greek island in the Aegean Sea which, together with Sikinos, Ios, Anafi and Santorini, forms the southern part of the Cyclades. Its surface area is about 32 square kilometres (12.4 square miles) and it has 700 inhabitants. It has three small villages, Chora, Karavostassis, and Ano Meria, which are connected by a paved road.

Little is known about the ancient history of Folegandros. Its inhabitants were Dorians. Later it came under Athenian rule. The island was conquered in 1207 by the Venetian Marco Sanudo and remained under the rule of Venice until 1566, when it was taken by the Ottoman Turks. The Greeks reclaimed it in the 19th century.

Folegandros landscape is varied, and includes tall cliffs and a large cave. The capital of the island, Chora, is built on the edge of a 200-metre high cliff. The port of Folegandros is the small town of Karavostassis. The village of Ano Meria contains a small but interesting Ecological and Folklore Museum. Among the notable beaches on Folegandros is Katergo, accessible only by boat from Karavostassis.

Folegandros is one of many secluded Greek Isles that offer nature in its most prestine settings. With its clean blue ocean waters it was named by the Travel Channel, as one of the Top 10 Beaches in the World.

FROM FOLEGANDROS TO MYKONOS .... FIND A HOTEL AT MYKONOS ONLINE NOW !