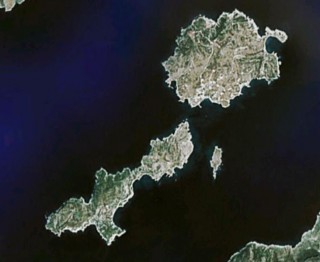 There are two versions, as far as the name of the island is concerned. According to the first one, Koufonisia was the ancient name of the gulf which is between Koufonisia and Glaronisi. As a matter of fact, the full name was "Koufos Limin", which means lee port, where ships can anchor.

According to the second version, which is supported by Manesis, this name was chosen because of the large number of caves and sediments without boisterous rocks that are found on the island. Anthony Miliarakis, in contrast with these two theories, wrote in his book in 1920 that Pano Koufonisi was known as "Fakousa" and Kato Koufonisi as "Pino".

According to archaeological findings, Koufonisia were inhabited since Prehistoric Times. Excavations in Epano Mili brought into light important findings that date to the first years of Cycladic Civilization. One of the most important findings from this period is a fryer shape vessel with a nine-ray star on it, exhibited in Naxos" museum. Excavations in the east shore brought into light findings of the Hellenistic and Roman times.

In the course of history, Koufonisia followed the fate of the rest of Cyclades islands. They were dominated by the Venetians and the Turks, who, mostly in the 17th century, run against each other for the governance of Aegean Sea. Residents of Koufonisia, either because they needed to or because they wanted to, were often joining their forces with the residents of Mani or with other pirates, who were using the channel between Pano and Kato Koufonisi as a safe shelter. Koufonisia were set free along with the rest of Cyclades islands and incorporated with the young Greek nation in 1830.

During occupancy (1941-1945), residents had difficult times. In the postbellum period the island had 1000 inhabitants. However, many of them migrated to Athens in order to find a job and many men left to find job as grummets. Residents were going to the other greek islands and the mainland by small boats (caiques) and by a ship that was going to Heraclia every eight days. Those years, there was only one doctor in Small Cyclades and when the weather was bad, he could not travel to Koufonisia.

A few words about Koufonisia - Koufonisia Islands Cyclades Islands Greek islands  Greece .Koufonisia consists of two islands, Kato (Lower) and Pano (Upper) Koufonisi that belongs to the complex of Small East Cyclades. Geographically, it is located on the southeast side of Naxos and on the west side of Amorgos. Koufonisia also includes the tiny, uninhabited island of Keros. Keros is a protected archaeological site from which a large number of ancient Cycladic art pieces have been excavated in the 20th century.

Kato Koufonisi is located next to Pano Koufonisi, Shoinousa and Keros. It has an extent of 4, 3 sq.km. and it"s almost uninhabited, as there are only a few rural houses on it. The most characteristic sight of the island is the small church of Panagia that is built on the jetty, on top of ancient ruins. In its small, photogenic port anchor only fish and tourist boats that take the tourists to the magic beaches of the island.

Pano Koufonisi is the smallest and most densely populated island in Cyclades islands. It has an extent of 3,5sq.km with a population of 366 residents. The main occupation of the locals is fishing, so Koufonisi is a true fishing village where the visitors can eat fish and seafood in abundance. Compared to its population, it has one of the biggest fishing fleets in Greece. The white windmill on the east side of the port welcomes visitors when they arrive on the island; you can also rent it for your holidays. The settlement of Chora on the southwest coast of Koufonisi is a characteristic example of Cycladic architecture. Its heavenly beaches - the majority of them are sandy - are part of the magic picture of the island. Koufonisi has only been developed the last ten years, as far as tourism is concerned, so the natural beauty and its traditional colour has remained unfaded. All of this - along with the warm hospitality of the residents and the reasonable prices of the hotels, the rooms for rent and the food, make the island the perfect destination for the summer and - why not - winter holidays.

A visit to the museums and the archaeological monuments, the discovery of the manners and customs, or even the taste of Koufonisia"s traditional specialties can introduce the visitors to the local culture.

The island"s museum, which is going to be housed in the old school"s building, will be open soon. Its exhibits will be findings that date from the prehistoric period until now. Keros is an archaeological site, characteristic of the Cycladic civilization and culture. On this rocky point of the Aegean were discovered the eminent statuettes-symbols of the Cycladic Civilization, the Piper and the Harpist, which are now exposed at the Archaeological Museum of Athens and are evident of how churchy people of that period were.

There are many places of interest that someone should visit during his stay on Koufonisia, such as the central and the back port, the piscatorial shelter, the carnagio, the windmills and the churches of Agios Georgios, Agios Nikolaos and Profitis Ilias. The fishermen in their small boats (caiques) is a characteristic picture of the island. The full-moon nights and Keros" view in the moonlight are a unique experience for the visitors. According to the residents of Koufonisi, the contour of the deserted island in the night reminds of a female, prostrated Cycladic statuette. According to the same description, the first full moon (in 21 of June) is coming up from the vagina of this female figure. The church of Virgin Mary is one of the most important sights on Koufonisi, whereas, in Keros apart from the archaeological findings, someone can enjoy the magic sunrise.

Cycladic architecture is prevalent on Koufonisia. The exterior surfaces of houses and all other buildings are painted white and blue in order to match with the boundless blue of the Aegean Sea and create a modern but also magic atmosphere. The interior of a typical house of Koufonisia consisted of three rooms: a bedroom, a kitchen and a large room used as living-room. The roof, known as "Steosa" was usually made of reeds, wood, earth and a kind of wood taken from fida, called "kontarida".

Saint George is the patron saint of the island. On his name day that is on the 23rd of April, there is a procession of the saint"s icon. "Panigiras", who is an islander votary to the Saint, is going around the island holding the icon in his hands. The roads that he passes by are full of roses. After the end of the procession, a traditional feast takes place in the village"s square. Food - veal, braized with potatoes, patsas- and wine are offered to the visitors. All the taverns of the island take part in the feast. Easter is celebrated traditionally on Koufonisia. On Good Friday the port is floodlit by torches and on Easter the sky is full of fireworks. On the last Saturday of June the "feast of the fisherman" is organised on Koufonisia. Young people dance traditional dances and the most popular island songs are heard. Fresh fish, delicious snacks and drinks are offered, while listening to the music of the instruments. The feasts are characteristic of Koufonisia and give a traditional colour to the island. A big celebration is held on the 20th of July in the name of Prophet Elias and on August 15th. On the 15th of August the celebration of Panagia (Virgin Mary) takes place at the little church of Kato Koufonisi. After the service the people offer food and then they are carried back to Pano Koufonisi by the fishing boats. They compete with each other who will get there first and when they are back, a feast takes place. Last but not least, the name day of Agios Nikolaos and Christmas are celebrated in a special way on Koufonisia- the most characteristic moment is when the older residents of the island sing the Christmas carols.

During the epitaph"s procession the sky is lit by fireworks and events are organized on the main beach of the island.

The wedding is a very special moment for Koufonisi"s residents. The first step was the matchmaking and the second one the engagement. After some days, the couple had to undertake the wedding preparations. Both, the parents of the bride and the parents of the groom offered their products- meat, sweets, traditional pasteli and kserotigana. They were going out to invite the people to the wedding. When they were going to the best man"s and the maid"s of honor house, they were accompanied by musicians. After all these, they were inviting the bride and the groom and they were starting their way to the church. The party lasted two days. Eight days later a second party was organised which was also known as "antigamos".

GET ALL INFO about MYKONOS HOTELS at